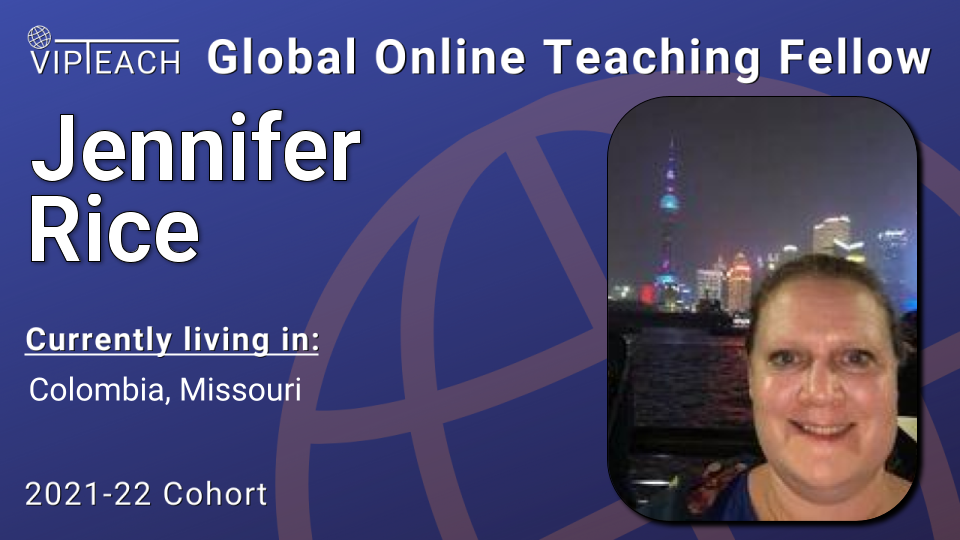 VIPTeach Fellow Jennifer Rice on accepting reality and learning from her children.

I have also had to accept some harsh realities about myself and my methods.

The most unwanted student in a school building is the one with behaviors. Whether the behaviors are not being able to sit still, throwing things, yelling at peers and adults, or curling up and crying, emotions make us uncomfortable in a classroom setting.  How much more could we accomplish if we did not have those students in our classrooms?

Every student benefits from differentiated teaching.  It has become a buzzword in our industry of education. Differentiation means many things, however. To some, it is simply giving fewer problems.  To others, giving a choice of several types of activities is differentiation.  None of these are wrong.  The definition of differentiating is modifying instruction to meet individual needs. This sounds daunting.  When taken by the letter of the law, it is. Who has time to plan 30 lessons (or more these days) for 30 individual students for five subject areas?  It is impossible, right?!  If you look at it like that, yes.  It is nearly impossible to have a life outside of lesson plans if that is what you are trying to do.  So, teachers have learned to put students into learning groups.  Groups help to defray some of the time spent on lesson plans for 30 students and five subject areas. We use flexible grouping so the students are not “locked” into one group. So, the list goes on and on differentiating content, process, products, and even the learning environment.  We use portfolios and ongoing assessments to monitor learning for students.  That is just for our regular education students.  Then, we have those students who do not keep pace with their peers.  They struggle to read, or they cannot access the same math level because they have not mastered the steps or steps earlier in the lesson, especially as they grow older.  We now have to choose how to spend time educating them.  Combine those needs with behaviors?  “No, thank you. I will take anything but the student who has behaviors.” That is the common response.

This is where personal biases come in.  Imagine, for just a moment, a classroom where everyone is equal.  Is that in your mind?  What did you picture?  Quickly think of three words you would use to describe that place you imagined.

The word equal conjures up so many definitions.  What you pictured in your head for the brief moment before the questions began is your bias. The words you wrote are part of your belief system. My personal experiences (and biases)  led me to picture a classroom full of energetic, happy learners. There was learning going on and I was the teacher. Students were at desks, on the floor, and standing at a counter.  However, all were working and happy to do so.

When I asked my son, who has Autism, to do the same exercise it was vastly different.  He said equal means people are getting all the same services.  He did not think an equal classroom is a good thing.  This is because not everyone needs the same specialized services.  He said very few need to be in SPED, but for those who do, equal classrooms do not work.  They have to be given their own set of guidelines. Although we are similar in socioeconomic status, culturally similar, and live in the same household, his experiences in school are vastly different from those of mine. His knowledge of equality is much different which makes his biases different.

Using my children as examples, I will show how different differentiation can look for special needs students. First, each of my children are delightful human beings.  They have to be, they are my children (wink,wink).  However, they are not perfect, nor are they always lovable.

My oldest was diagnosed with Autism at the age of 17, three weeks before his 18th birthday.  Therefore, he had no IEP growing up.  He was a quiet student.  He did not show much emotion until he melted down. Differentiation for him was to watch his affect.  It was slight, but visible when watched for. The teachers he did best with were the teachers who took the time to understand him as a learner. Though everyone does this a little differently, the best experiences he had in the classroom were teachers who got to know his “quirks” and did not try to change them. Those teachers who got to know his unique personality traits were able to have fewer meltdowns and were more successful in getting him to work. He did not need much else, as he was able to learn independently as long as he was comfortable. Teachers who allowed him to “miss” classroom instruction for his mental health saw better grades than those who felt that the “missed instructional time” was more important than him calming himself. Quite the opposite, he would quietly shut down in the classroom and learn nothing.

My middle child was diagnosed with explosive anger disorder (Emotional Disturbance) at the age of 9.  Differentiation for him meant reading his moods.  However, unlike my oldest, my middle child would rage, throw things, and disrupt classes.  Differentiation for him meant he needed a quiet place to go when he was upset.  During his time learning to cope in the classroom, he could not wait to go to his quiet place, so the room had to be cleared for him.  For him, the differentiation needed to come from watching cues in his breathing and mannerisms.  His “quirks” were much more pronounced than those of his brother. One piece of differentiation we learned from him was that peers were much quicker to pick up on his cues than his teachers.  Although there is a bias not to use other students, there are times, it is not only appropriate, but can help manage behaviors in a classroom.  Though students need to be kept safe, there is not any logical reason that a peer mentor be assigned to watch and give the teacher a cue that he needed help. In addition, the ability to leave and return to the classroom became necessary. Differentiation for that became core people in the building being on call if he left the classroom. In that way, there was no chance of an unknown teacher to approach him and risk even more anger.  Unfortunately, this was not discovered for him in a very timely fashion and he was suspended many times for his anger.  As he got older, it was necessary to make things “rules” that were non-negotiable, then give him choices for other things so he knew that going into the hall would require an adult intervention.  As long as it was a safe person, he responded with much less violence.

My youngest child has had much more academic differentiation.  He can learn, but needs things delivered in short chunks and/or using song and videos.  This is so true now with the YouTube world and vloggers it does not look very different from those lessons for other students.  However, he also needs a check in at the beginning of the class.  Teachers who stand at the door and check in with him see a much different student than those who are behind the desk or not paying attention to students when they enter the classroom.

Though not easy, each of these needs of my children can be met with simple and direct approaches.  It may take some time on the front end to differentiate, but your time spent before classes will be returned to you tenfold.  Below is a synopsis in bullet point from what we learned about differentiation at my house.

What biases do you have with students who have behavior problems?

To join the conversation, leave comments on our facebook page @VIPTeach.

Jennifer Rice is a passionate and dedicated educator, researcher, and student of educating others. Jennifer has a B.S.Degree in Behavior Disorders and Intellectual Disabilities. She continued her education to include a Masters in Administration and a second Masters in Autism. Her passion for learning had led to her participation in curriculum committees in math, Language Arts, Social Studies, and Science. Although her degree is in special education, she has also taught in the regular education classroom. Jennifer’s passion and dedication for educating all individuals led her to be nominated to the Superintendent’s Advisory Counsel for her District of Columbia Public Schools, one od the largest in the state of Missouri. Jennifer took a break from brick and mortar schools to focus on the needs of her three boys. Two of the three have high functioning autism, the other struggles with ADHD. She did not stop learning, but instead took the opportunity to learn and grow in the field of advocacy in special education. In addition, she began teaching ELL online. Jennifer was honored to be one of the first one hundred teachers to teach online in rural classrooms in China. Because of her passion, she traveled to Chinas Xinjiang Province to meet her students and Chinese lead teacher. While there she was able to participate in a question and answer session with teachers and principals from rural China.